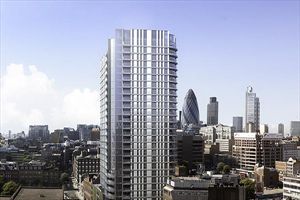 At 90 metres in height, the landmark ‘Altitude’ development in Aldgate will become the tallest Barratt Homes project to date and one of a select number of residential towers in central London.

Acquired by Barratt Homes and housing association London and Quadrant, the £124 million redevelopment scheme has been granted detailed planning consent for the demolition of the existing building and the construction of a twenty seven storey tower that will offer 235 new homes, as well as ground floor retail units.

Next to the main building, there are plans for a smaller seven storey commercial block. The mixed-use development will offer in excess of 170,000 square feet of residential space and 14,000 square feet of commercial space. There are also plans for a new public plaza that will link the development to the surrounding streets. The twenty seven storey building will have views over Tower Bridge and the Tower of London, Canary Wharf and the Olympic Park at Stratford.

The scope of the intrusive phase of the ground investigation included drilling two exploratory boreholes to depths of 40m for the twenty seven storey tower and a single borehole to a depth of 25m for the seven storey commercial building. The boreholes were drilled pre-demolition and were located within the existing basement using a demountable low headroom cable percussion rig.

Shallow inspection pits were hand excavated within the basement to determine the configuration of the existing foundations and small diameter hand held percussive window sample boreholes were formed through the base of some of the inspection pits to depths of 3m.

The programme of geotechnical laboratory testing was designed to obtain soil classification, chemical, one-dimensional consolidation and undrained shear strength parameters. On-site headspace testing was carried out using a photoionisation detector to measure the presence of volatile organic compounds and a programme of environmental chemical testing was scheduled in order to determine the levels of common contaminants and to analyse selected samples to classify the soils for off-site disposal to landfill.

RSA Geotechnics prepared an interpretative report providing advice on the geotechnical and the environmental aspects of the project, including conceptual modelling and a qualitative risk assessment.